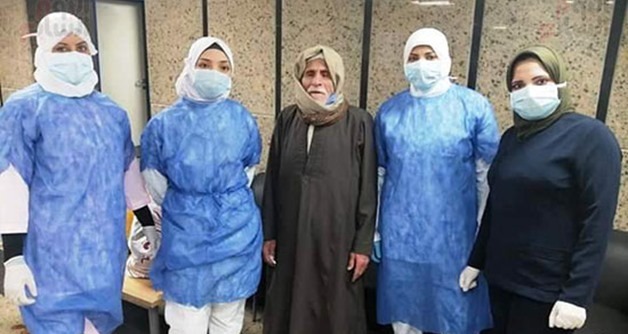 You’d be surprised to hear that yet another older man was capable of fighting and defeating the virus after testing positive for the global mysterious pandemic.

Abdel Moneim Ibrahim, age 88, was thankfully released yesterday evening from a specialized quarantine hospital in the governorate of Qaha located in Northeast Egypt. He was released only when they had made sure that he was fully healed.

Moneim has a large family that that was waiting for him eagerly to get out. With four sons and a total of 10 grandchildren, Moneim was considered to be the oldest person to recover from the coronavirus in Egypt.

It all began when he started noticing normal symptoms of the flu. That was when he was taken to Abbasiya Fever hospital and where they had discovered that he is yet another person who had tested positive. They then later moved him to the Qaha quarantine hospital to undergo the proper procedure of quarantine where he stayed for two whole weeks.

After going through serious procedures and having to take two tests per day, he then miraculously tested negative and had fully recovered. This had raised the number of recovered patients to 36 in Qaha hospital.

It was a great act of kindness when the medical team at the hospital had some form of a celebration party for the 88 year old man who was one of the many few elderly people who had fully recovered from the virus.

On the bright side, a new medical team was associated at the Qaha quarantine hospitals of last Friday for the time span of 14 days where they show that they are truly keen on helping people recover as well as save as many people as possible.

We would like to express our greatest gratitude for all the medical teams in Egypt, and around the globe of course, whom are risking their lives to help save others. This truly shows that people are regaining their humanity. Maybe there is hope for kindness, love, and peace in the world.

Omar Samra Challenges you to Climb Mount Kilimanjaro from Home