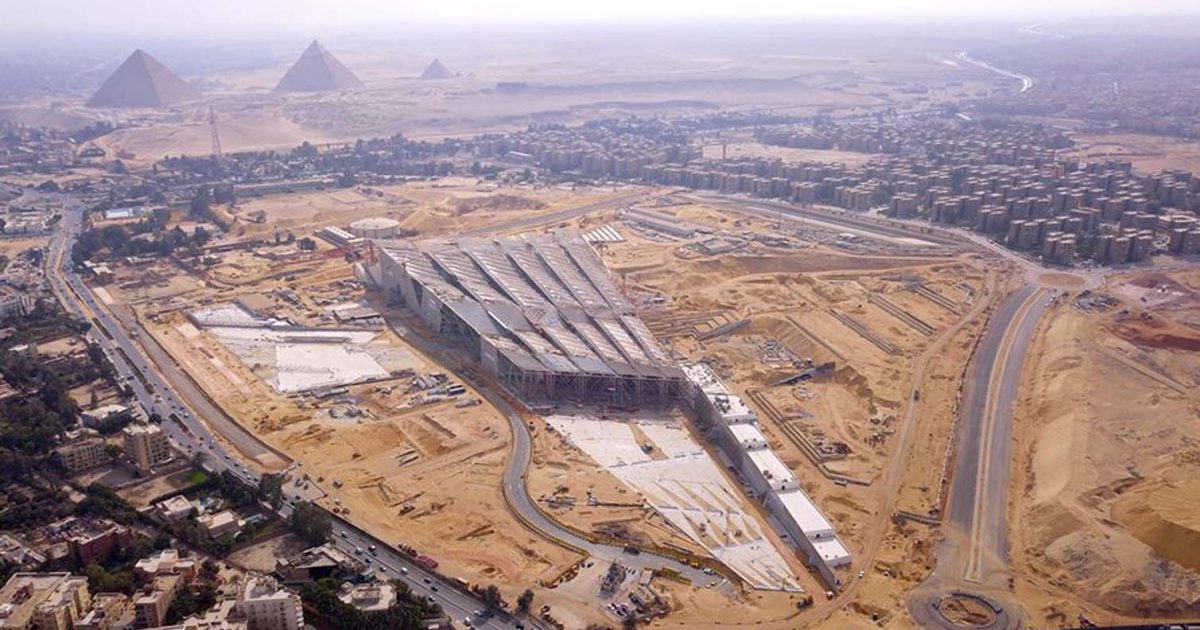 Located in a close proximity to the Pyramids, the Grand Egyptian Museum is expected to play a focal point for the touristic sector in Egypt. The area will mainly consist now of the GEM, the Giza Pyramids & the Sphinx, in addition to Egypt’s newest Sphinx International Airport.

The project’s foundation was laid back in 2002, while constructions started in May 2005. Ever since, the long await for this mega project to open has been eagerly anticipated.

The museum is built on a land area of 117 acres, and is set to become one of the largest archaeological museums worldwide. Whereas thousands of artifacts will be displayed in the museum for the whole world to witness, and in the hope to attract more tourists to the country.

A few days ago, Minister of Tourism Rania Al-Mashat announced that the museum will be inaugurated in the first quarter of 2020; giving the long wait a final closure soon.

Al-Mashaat also announced that the belongings of King TutanKhamun shall be displayed in a Holographic 3D imagery, during the opening of the museum in 2020.

Egypt has already been racing to restore the glory of King Tut’s collection, and is finalizing the artifacts to be ready for display.

The 5,000 piece collection will be permanently displayed in its new home, the Grand Egyptian Museum.

Rami Magdy working on the restoration of a chariot from Tutankhamun’s tomb at the Wood Laboratory in the Grand Egyptian Museum’s conservation center.

GEM’s General Manager, Tarek Tawfik, previously said that Tutankhamun’s collection is taking a space of two 7,000 square-meters galleries in the museum; thus giving us a wide look at the life of the King behind the Golden Mask, including how he dressed, lived and ate.

During an interview with CNN, Al-Mashaat expressed her faith ‘that the GEM is going to revive the cultural tourism again, not just to Egypt, but the whole world. This is the only museum that has the full collection of TutanKhamun. ”

“Also, the only place with the Pyramids as the backdrop,” She added.

Dr Abbas is currently the deputy dean of the Faculty of Tourism and Hotels for education and student affairs at Minya University. He is well fit for the role, for his wide experience and knowledge.

Also worth-mentioning is that King Ramses statue is placed in the GEM’s lobby entrance; to welcome the eager attendees.

Furthermore, the facade of the museum is coated with alabaster stones, and the walls of the GEM that overlooks the Pyramids will have a glass panoramic view! Thus, giving the visitors an extra privilege and an even better experience of Egypt’s ancient history.

The Grand Egyptian Museum will cost $1.100 billion financed by the Japanese government through two loans worth $450 million. Even though, the amount may shock you, it is however, money well spent.

According to Al-Mashaat, the GEM “is a clear testament that Egypt has a lot of heritage and a lot of antiquities to show to the world in an era where cultural tourism is on a decline.”

To read more about the GEM, click on this link.

Egypt Partners with CNN to Launch a Global Tourism Campaign

The Grand Egyptian Museum to be launched in 2020