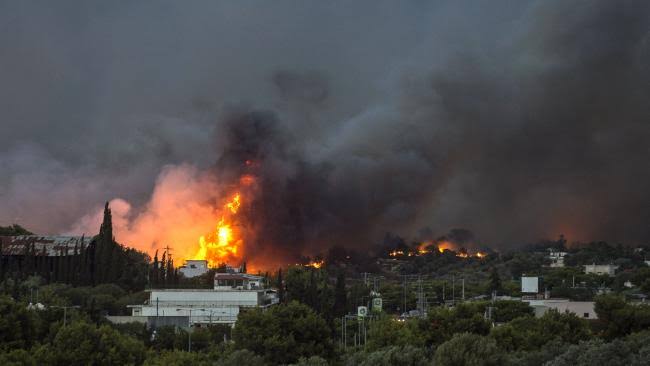 What is happening in eastern Attica is a black hell. Have you heard about the tragedy of the wildfire spreading in Athens, Greece? If not, carry not reading.

Firstly, wildfire is basically a large, destructive fire that spreads quickly over woodland or brush. However, this fire season has become is the deadliest in decades.

Fire swept through the village 40km (25 miles) north-east of Athens on Monday and was still burning in some areas on Tuesday.

Fires are a recurring problem during the hot, dry summer months in Attica.

Officials quoted by AFP news agency have suggested the current blazes may have been started by arsonists looking to loot abandoned homes.

As wind-fueled wildfires that killed at least 79 people in vacation areas outside Athens bore down on their seaside resort, 26 men, women and children gathered in the hope that they could find the narrow path leading to a small staircase down to the water.

The gated entrance stood only a dozen paces away, but with smoke blotting their vision and choking their lungs, they appear to have lost their way. Officials found their bodies the next day, Tuesday; several were still clinging to one another.

Greek authorities are looking for dozens of people missing after the deadly and catastrophic wildfires near Athens. After At least 79 people have died, and a search continues for survivors who fled the blaze, including those who took to the sea. More than 170 others have been hospitalized with burns and other injuries.

Furthermore, the blaze struck like a flamethrower, causing both smoke inhalation and skin burns. Coastal patrol boats and private vessels picked up hundreds of those who did manage to reach harbours or beaches.

Flames fanned by strong winds devastated the seaside village of Mati, devouring homes and cars. The coastguard said it and other ships rescued almost 700 people who had fled to the coast, and pulled 19 survivors and four bodies from the sea.

Desperate families in need were trying their hardest to reach the safety of the sea were trapped by walls of smoke and flame. They just couldn’t make it. Others died in buildings or cars.

The blaze has created such thick smoke that the main highways between the Peloponnese and the Greek mainland have been shut down and an orange haze has descended on Athens.

The first fire broke out in a pine forest near the seaside settlement of Kineta 50km west of Athens between the capital and Corinth. At least 150 firefighters were on the scene while five water-dropping planes and seven helicopters helped to fight the blaze from the air.

According to BBC.UK, after the 26 bodies were found in an open space, Nikos Economopoulos, head of Greece’s Red Cross, said: “They had tried to find an escape route but unfortunately these people and their kids didn’t make it in time. Instinctively, seeing the end nearing, they embraced.”

Mati is located in the Rafina region which is popular with local tourists, especially pensioners and children attending holiday camps. Rescuers there found the bodies of 26 adults and children, who had apparently hugged each other as they died, trapped just metres from the sea. It is devastating and heartbreaking how these people couldn’t make it.

High winds spread the fire, trapping many in homes and vehicles and forcing others into the water as they tried to escape the flames.

One of the survivors claimed that the village has disappeared which more than 1,000 buildings had been destroyed or damaged!

Hundreds of firefighters have been battling the blazes and the authorities are seeking international assistance. A fire brigade official confirmed the latest death toll.

Prime Minister Tsipras has declared a state of emergency in Attica, saying all emergency services had been mobilised.

We, the What’s Up Cairo Team, wish all those survivors a speedy recovery and all those families mourning for losing their beloved ones to stay strong and we’re all here for you! 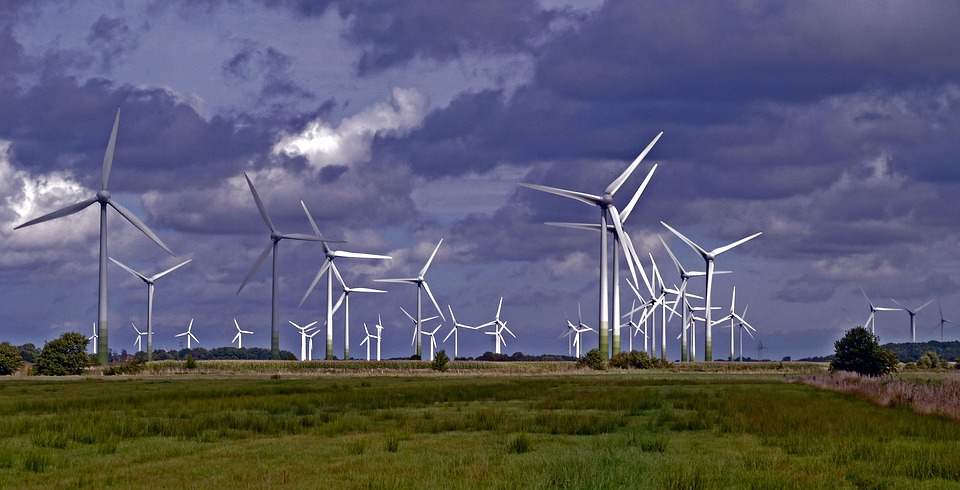 Minister of Electricity and Renewable Energy Mohamed Shaker said that currently there are work underway to build a new wind power complex with a capacity of 2,000 megawatts, located in the Red Sea governorate.

The German company Siemens will generate the 500 megawatts. Shaker also added that this step will take the generational capacity of renewable to the next level by increasing it to 10,000 megawatts, this all come as part of the state’s National Renewable Energy Strategy.

The National Renewable Energy Strategy looks forward to producing 20% of total energies from renewable sources by 2022, with the possibility of doubling the percentage by the year 2035, the minister added.

The energy produced from solar cells connected to the power grid amounted to about 3,655 gigawatt/hour, in addition to about 15 gigawatt/hour generated from biofuel projects.

We’re proud that our country is always aiming at developing clean energy for the better good of our community.

A Girl Harassed and Killed By Three Men In Maadi 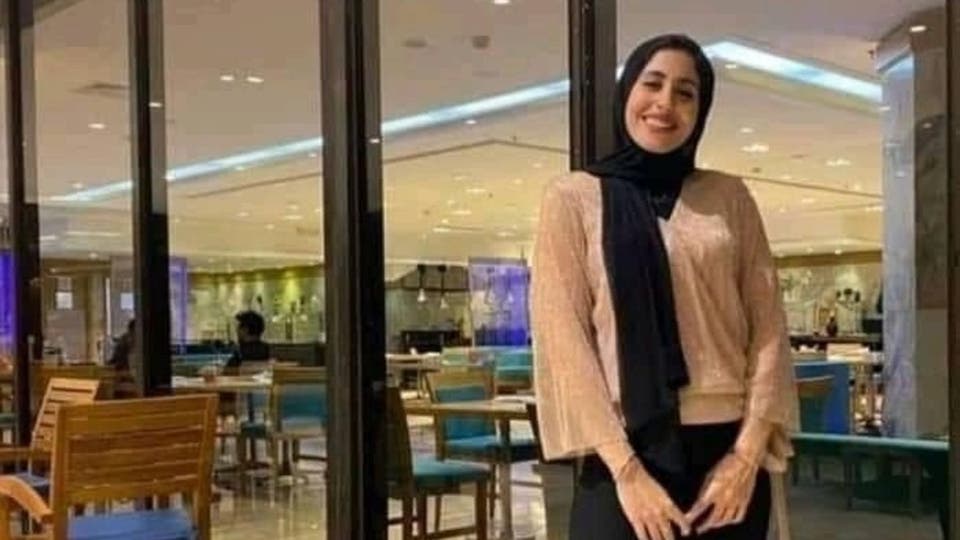 As we write this, we’re in deep and shock at what happened to a young victim in Maadi. A girl in her mid-twenties attacked by harassers to a death point…

The horrific incident happened in one of the streets of Maadi, the young girl was walking home, when suddenly three men started harassing her and when she tried to get away, the three men attacked her and dragged her for several meters on the asphalt.

Luckily, security services managed to identify three suspects after unloading footage from the security cameras around the area. Alerts have been sent out for the arrest of the three men responsible!

Our deepest condolences go to her family and friends, we’re still at shock and despair of what happened. 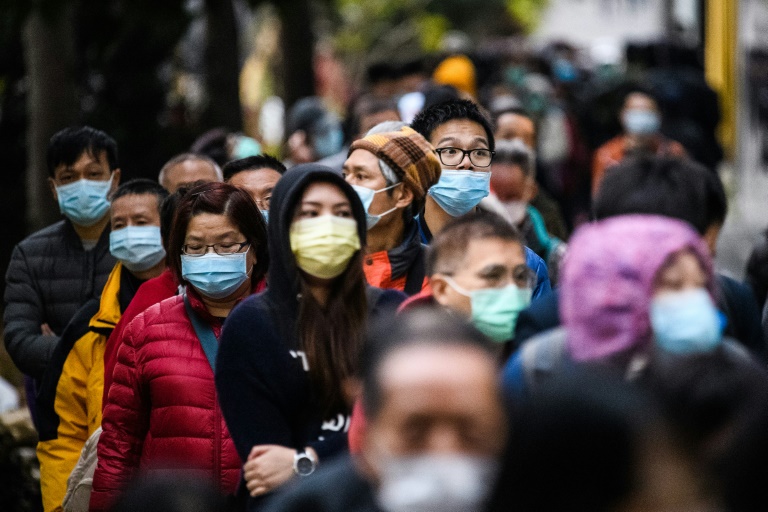 A second wave of the coronavirus is expected to hit and here’s how Egypt is preparing to face it!

Egypt’s Health Minister Hala Zayed said that if the wave does hit, Egypt will not force another lockdown and that it is preparing to face the second wave.

Egypt’s Health Minister Hala Zayed told the 67th session of the World Health Organization Regional Committee for the Eastern Mediterranean on Tuesday, that Egypt has learned from the first wave not to resort to the strategy of shutting down completely or even partially.

“This is the lesson we learned from the first wave; that countries should not resort to this strategy the way they did during the first wave, but should rather respond to surges in cases within localised [population] clusters,” Zayed said.

“However, all [precautionary] health measures will remain in place in the upcoming wperiod,” Zayed assured.

The minister also added that 2,300 persons have volunteered to undergo clinical trials in Egypt so far, and that 1,770 people have been subjected to full research.

The vaccine will be prepared at Factory 60 at VACSERA, the minister added.

Minister Hala Zayed also assured us that a number of 600 hospitals across the country are fully prepared to deal with any possible or sudden rise in number of cases.

During a press conference held in coordination with WHO, Zayed said: “we developed 45 fever and chest hospitals, and the development process of the remaining hospitals is underway.”

On an individual level, we must as well be prepared for a second wave and take precautionary levels to keep the number of cases at bay.