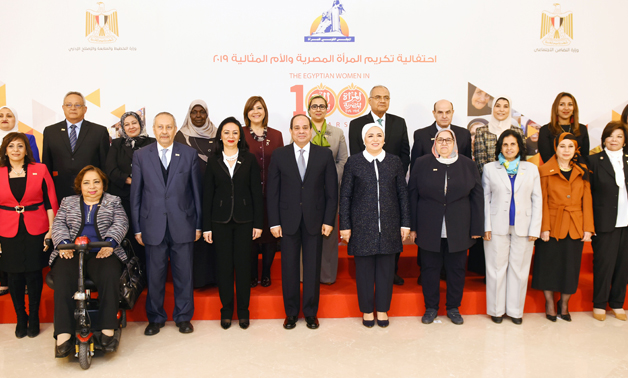 President Abdel Fatah El-Sisi, along with his spouse Entissar El Sisi have attended on Saturday a celebration to honor 42 extraordinary Egyptian women and ideal mothers, in light of the Egyptian Women Day.

The celebration was held at Al-Manara International Conference Center in New Cairo, and has been held yearly ever since El-Sisi took office back in 2014.

The event was organized by the ministries of Social Solidarity and Planning, in addition to the National Council for Women.

The celebration kicked off with a documentary called “story of homeland”, the movie portrayed the struggles that Egyptian women have been facing since the 1919 revolution, and highlighted those who sacrificed their lives for the better well-being of the nation.

The documentary has also featured the formation of the women’s committee for popular resistance back in 1951, the committee that was formed by the Egyptian activist Doria Shafiq; in an attempt to fight off the British occupation in Egypt.

Another topics were tackled in the documentary, such as the establishment of the National Council for women in the year 2000, and the granting of Egyptian women the right to run for parliamentary elections for the very first time in 1956. In addition to highlighting the female volunteers that were granted a spot in the Egyptian army.

Last but not least, the documentary shed the light on several remarkable women, including Fayza Abul Naga who got appointed Presidential Adviser for National Security Affairs making her the first Egyptian woman to assume such post, and Aisha Rateb who was Egypt’s first female ambassador back in 1979.

During the event, President El-Sisi called for enforcing laws that protect women’s rights, and eventually end domestic violence. The event also included the discussion of crucial topics such as early marriage and depriving of education and post-divorce rights.

Finally, President El-Sisi hopes to witness results soon for the “Mawada” program, which aims at raising awareness on marriage responsibilities among youth.

What Went On During This Year’s Earth Hour

The Egyptian Museum to Host a Remarkable Exhibition In April