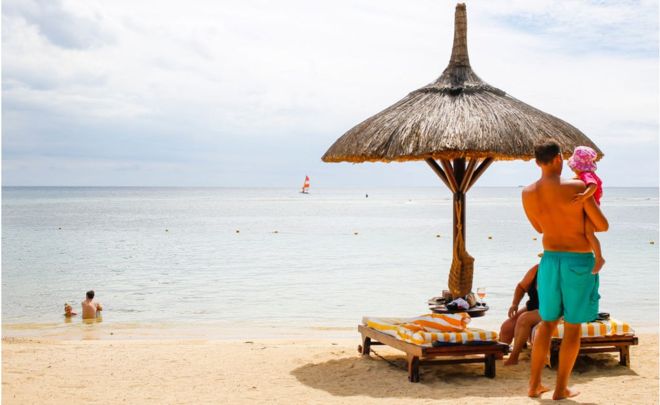 The British holidaymaker is back in fine fettle with a January jump in bookings for the summer.

Helping sales is a growing army of 2,000 personal travel agents who work from home and visit clients whenever convenient.

Worries about a Brexit effect on travel and the economy caused a lull over Christmas, but the vital New Year selling season is off to a rapid start.

Bookings so far for May to October are up 5% versus the same period last year.

Michelle Tolton, from the village of Rothley, near Leicester, sells holidays in clients’ houses, over the phone and via Facebook.

“It’s going well this year,” she says, “People are booking early. They want to escape the doom and gloom.

“I do all the legwork because they have busy lives.”

Visiting a local customer, Kate Newman, the talk is about a holiday for 16 members of her family to one of this year’s most popular destinations.

“We’re still thinking of Turkey – you get more for your money,” Kate explains.

Michelle is well on her way to her target of a hundred bookings for the year.

Many are to Europe, but she has also sold trips to see gorillas and luxury jaunts to Mauritius and Australia.

The last two weeks have been a crucial period for the travel industry, after pre-Christmas speculation that people would be advised not to book trips for fear of a no-deal Brexit.

But the New Year has been even busier than usual, according to the latest figures from the market specialists GfK Travel Insights.

Non-EU destinations are up 19% compared with last year. That includes Turkey, but also Egypt and Tunisia.

The typical spend is higher as well, with the average selling price per person up slightly to £982.

The travel agents group, ABTA, says its surveys show that 38% of holidaymakers plan to spend the same as last year and 27% intend to spend more.

Alistair Rowland of Co-operative Travel believes some customers could be cutting back on mini-breaks and allocating more cash to their main holiday.

And he believes they are not being distracted by concerns about the UK leaving the EU.

“I think if anything people are so tired of Brexit, and they are used to their pound buying less,” he says.

“They are not willing to give up their main holiday of the year and they’re willing to invest in it.”

Travel shops are under pressure as more travellers buy over the internet.

But industry insiders expect the new breed of Personal Travel Agents will lead the fightback.

There could be a thousand more of them over the next few years, working from their kitchens and encouraging us to book early and book often.

Even this year, though, there are still plenty of would-be holidaymakers who prefer to bide their time and hold out for a bargain later on.