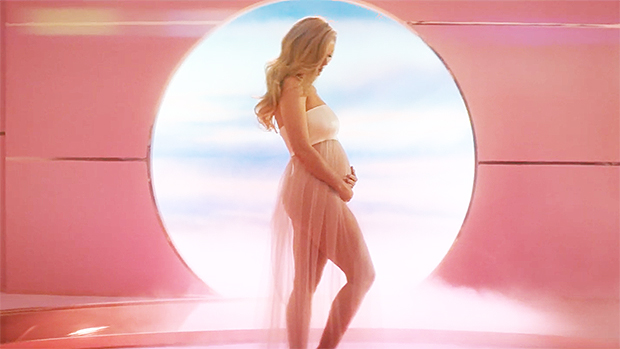 Huge announcement up ahead!

Do you have any idea how hard it is for hit celebrities to have to come out with the truth and say that they’re pregnant? Sometimes they prefer to keep it a secret for the sake of their own privacy and health precautions, I mean it’s their choice right?

Which is why poor Katy Perry had to keep her baby bump a secret for months now! It was funny how she’s been trying to keep it a secret by having to suck in her belly as much as possible.

Which is why it’s pretty cool that Katy and her hubby Orlando Bloom have finally come out with the great news! Thing is, they didn’t tell their fans that they’re expecting a baby in a tweet or even announcing it on a show, they came out in a super cool way!

The 35 year old singer revealed yesterday that she’s pregnant in her new music video that was just released! Katy released a teaser of her music video “Never Worn White” that showed her resting her hands on her belly, which looked like a mother cradling a baby bump.

That left her fans puzzled and asking too many questions. When her video was released on Wednesday night, only then did she confirm the speculation in the beautiful white dress with her baby bump!

or carry around a big purse lol

The song basically revolves around motherhood and marriage, more of that shows in her lyrics.

After the music video premiere, Perry took to Instagram Live where she directly confirmed that she is, in fact, pregnant, when talking about how busy the coming months with be with both a baby and new music on the way.

“Not only will I be giving birth literally but also figuratively to something you guys have been waiting for,” she said. “So let’s call it a double whammy. It’s a two-fer.”

Katy also stated that this was truly the hardest and longest secret she’s had to keep which is why she’s super stoked at finally letting everyone in on the news.

Check out her video down below!

What’s Up This Weekend