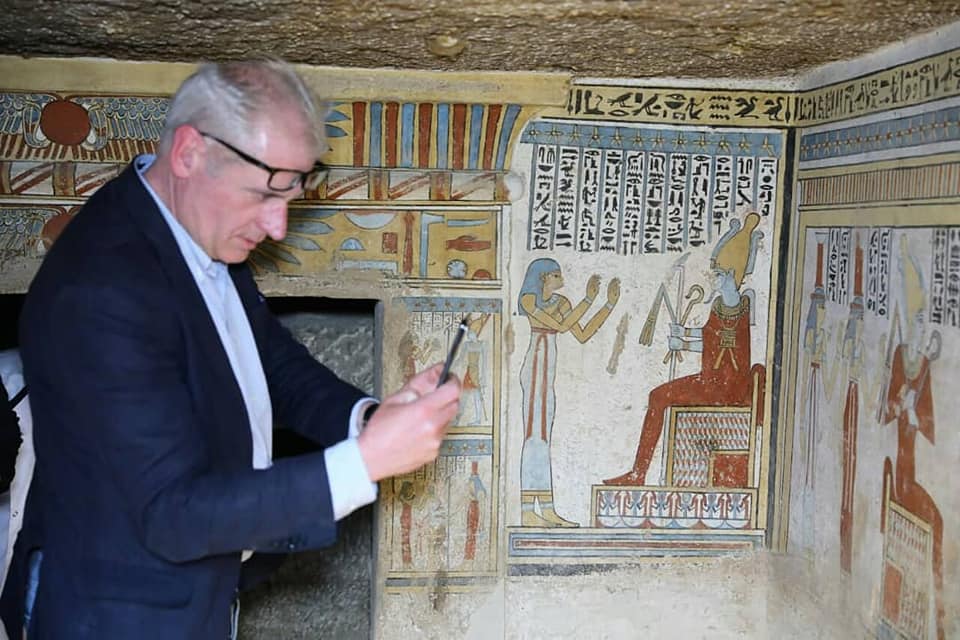 Egypt’s Tourism and Antiquities Police had uncovered another archaeological discovery, while investigating illegal expectations happening near the area of Al-Dayabat in Upper Egypt’s Sohag, where a tomb and well-preserved paintings were discovered.

After the completion of the on-going investigations, the Ministry of Antiquities assigned a scientific archaeological mission, that was led by Mostafa Waziri, secretary-general of the Supreme Council of Antiquities, to start excavations of the tomb.

The exceptionally painted tomb dates back to the Ptolemaic-era, and is made up of two small rooms that belonged to a nobleman named Toutou and his musician wife. A well-preserved mummy has also been discovered and recovered from the tomb.

“Although it is a very small tomb from the Ptolemaic period, it is exceptionally painted with beautiful scenes,” said Mostafa Waziri, secretary general of Egypt’s Supreme Council of Antiquities.

Besides these remarkable discoveries, the two small rooms included two limestone sarcophagi, in addition to a number of mummified animals and birds, such as falcons, eagles, cats, dogs and shrews.

Wziri explained that the ancient Egyptians believed that the shrews had the power to cure blindness, and that is because of their good sight at night, he also added that those discovered shrews are in a good condition.

The Grand Egyptian Museum to be launched in 2020