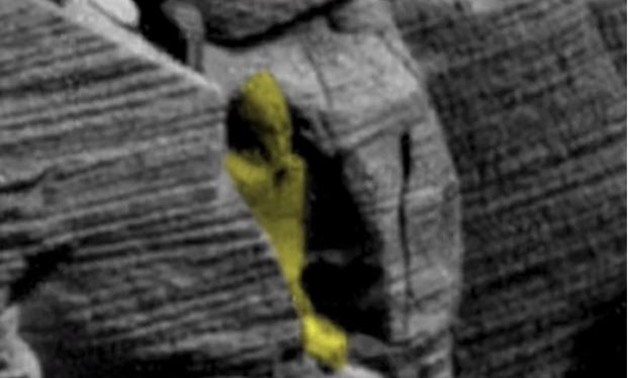 UFO expert Scott Waring opens a very interesting debate about ancient Egypt after one of NASA’s photos of Mars showed what looked like an ancient Egyptian sarcophagus.

This won’t be the first time to spot an object that looks exactly like ones that date back to ancient Egypt, as this coincides with a previous discovery of an object that resembled the head of an Egyptian statue on the Red Planet.

Scott used photo-editing tools to color the object, which he spotted in a Nasa photo of the red planet.

This discovery led Scott to start questioning where ancient Egyptians really came from? He is backing up his theory with the claim that Egypt is quite similar to Mars in both the weather and appearance, so it would make perfect sense for them to move from Mars to Egypt.

“I’ve got an interesting discovery on Mars that is going to rock archaeology,” Scott said in a YouTube video about the find.

“There is an Ancient Egyptian tomb of sorts carved into the side of this mountain on Mars.

“Are ancient Egyptians from Mars? Did they then move to Egypt? Egypt is very similar in appearance and weather to that of Mars. No other place on Earth looks much like Mars.”

“So if this is true, it totally explains why such amazing pyramids are built way out in the middle of nowhere,” he added. “It’s because it was the closest home that they could come.”

Well, none of these questions can be answered as Waring’s claims are not yet backed up by scientific evidence. So far, space scientists and astronomers didn’t find any trace or signs that there was once a life on Mars.

What’s Happening in the Amazon Rainforest

National Cancer Institute to Resume its Operations After Eid