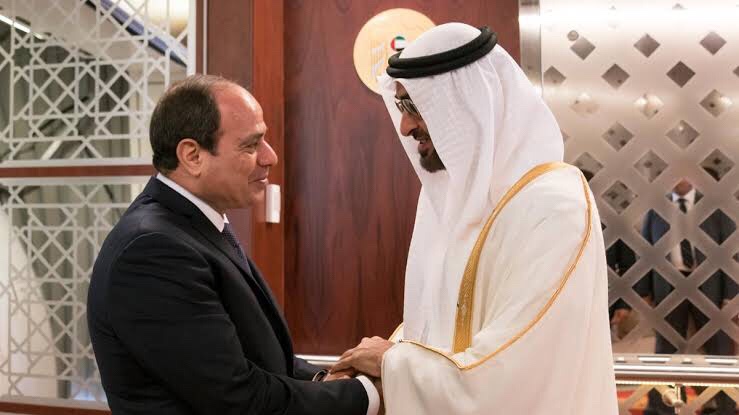 Sheikh Mohammed bin Zayed touched down in Cairo on Tuesday, beginning his official tour in Egypt.

Sheikh Mohammad took a step to Twitter and emphasized on the cordial relations that the UAE and Egypt have shared over the years and said that both the countries were staunch allies who stood as a symbol of Arab unity.

The two held talks in the VIP lounge of the airport before moving to Etihadeya Palace in Cairo where Sheikh Mohammed said they discussed ways to strengthen and develop the two countries’ relationship as well as regional and international issues.

“The UAE and Egypt are united by a long-standing historical relationship that is growing ever stronger,” Sheikh Mohammed bin Zayed said in a statement on Twitter. “We stand together firmly against all attempts to interfere in the internal affairs of the Arab region or to undermine its security and stability.”

The leaders discussed ways in which the bilateral relations between the two nations could be further advanced and also talked about matters of regional and international relevance. The Egyptian president hailed the constructive cooperation that the two countries had nurtured over the decades. This is the Crown Prince’s second visit to Egypt since last year in April.

The Crown Prince of Abu Dhabi said collaboration between the two countries is key to helping the region fend of risks particularly during the current era that is witnessing rapid changes and developments which require constant co-ordination among Arab countries.

President Sisi described the relations between the UAE and Egypt as a model of constructive co-operation, according to state news agency Wam.

Sheikh Mohammed last visited Egypt in April where he and President Sisi discussed how to enhance relations between the two countries as well as the overall regional and international issues of mutual interest.

We’d like to warmly welcome the Crown Prince, Sheikh Mohammed Bin Zayed, To Egypt. It’s a pleasure having you here.

The conference is going pretty well and here are more details about it,