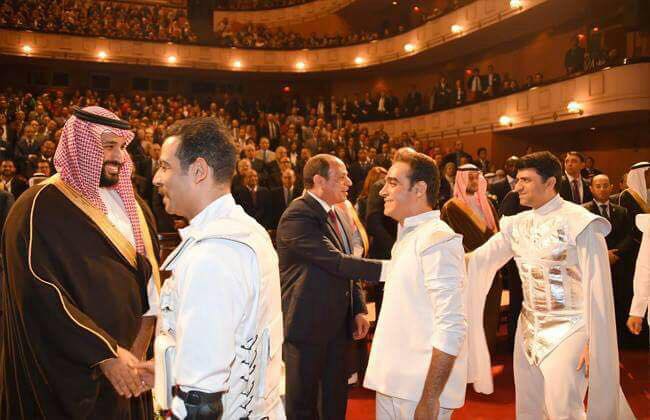 Egyptian President Abdel-Fattah Al-Sisi invited his guest Saudi Crown Prince Mohamed Bin Salman, to attend a theater performance at Cairo Opera House during his three-day official visit to Cairo. The performance titled “Sallem Nafsak” (Turn Yourself In) presented by 27 young actors and directed by Khaled Galal; a gesture that shows President AL-Sisi appreciation and support to Egypt’s soft power and its important role inside and outside Egypt.

It also comes at a time when the crown prince seems to be leading a major cultural transformation as it has been announced that Saudi Arabia will be building its first Opera House. It is also set to open its first movie theatre after a 35-year-ban.

The show “Sallem Nafsak” (Turn Yourself In) discusses the state of social chaos as a consequence of many factors, social media is one of them, and how it helped spreading destructive rumors. Sexual harassment and terrorism other major topics illustrated sarcastically in the in the show. The show states that we all have our flaws but this doesn’t mean to be excluded from society. One should never give up on humanity, but rather invest in its bright side.

Khaled Galal is renowned name in modern Egyptian theater. He has developed his own theatrical method over the years. Using current social issues as a starting point, Khaled lays out a number of ideas, and then his team of actors processes these ideas through improvisation. Finally, khaled brings all the pieces together in one coherent play script that he realizes into an interactive live show on stage.

Following this method, Khaled presented “Qahwa Sada” ( Black Coffee) in 2009, “Ayamana Elhelwa” Our Sweet Days, “ Hoboot Edterary” (forced landing) and other performances until he reached a more matured stage with his latest performance “Sallem Nafsak” which is considered a new milestone in his career.

Get Ready for Season Two of The First and Biggest Dental Reality Show In The Middle East: “Smile Masters” is back!