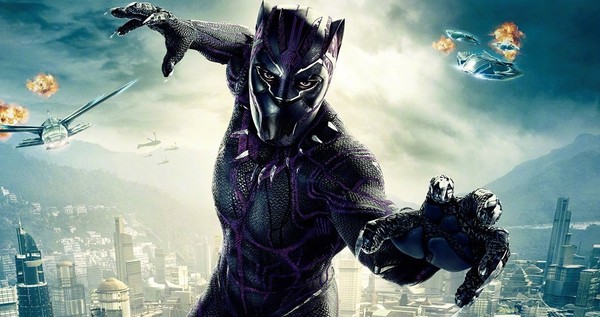 After becoming involved in the clashes between the martial factions of the Avengers in Captain America: Civil War, Prince T’Challa (Chadwick Boseman), now finds himself fighting for his crown. After the death of his father in a terrorist attack, he returns to his homeland Wakanda to face a series of adversaries which threatens his life as well as his country.

The film begins in 1992 in Oakland with a visit to an apartment from the king of Wakanda. What plays out there sets the film in motion. Then we are transferred to the present time, where  T’Challa is about to undertake a bittersweet ritual before being crowned the new king of Wakanda. This crown means becoming the Black Panther, who protects Wakanda with heightened senses and abilities and an awesome superhero suit.

Wakanda is known to be the poorest country in the world. But the truth is it has been hiding behind a cloak of deception for years. In reality Wakanda has been able to maintain a rural cover co-existing with incredible technology built on vibranium. It is a unique metal explained in the prologue before the opening credits.

Enters Erik Killmonger (Michael B. Jordan), who, as his name suggests, kills a lot of people, all American attitude and entitlement. He wants everything Wakanda has and will stop at nothing to get it even if this means to kill T’Challa. Killmonger thinks Wakanda should use vibranium to trigger a race revolution and become the world’s master. He has his own personal reasons, which go beyond the political.

Women are present and essential in the movie. General Okoye (Danai Gurira) is the tough-as-nails lead warrior defending the throne, while T’Challa’s little sister Shuri (Letitia Wright) is a brilliant scientist who supports Black Panther with the toys she comes up with in her lab. Nakia (Lupita Nyong’o), is a wise worrier. She is T’Challa’s lover and partner in battle.

Here you go, you’ve got a deadly game of thrones movie with thrilling spies. A Marvel superhero movie which  means enormous battles and chaotic fighting. But the movie doesn’t get lost in these scenes. Computer-generated effects make some of the scenes look like a video game, with people in high-tech suits fighting in the air (Oh that’s a movie to watch in 3D goggles). Yet there’s beauty: the costuming, the set pieces, and the presence of beautiful natural rich African culture. Also characters die but not in the bloodless, cartoonish ways known in movies like this.

Black Panther brings contemporary storyline without the excepted answers superhero movies often deliver with exciting action together in an outstanding movie that can please different types of viewers. In addition it sheds light on a current question: What is human’s role in the world today? T’Challa lays it out: “The wise build bridges, while the foolish build barriers.” It makes you wonder, is he addressing Trump or world leaders in general?

The movie also depicts a modern utopia on different levels. First, not only it presents a black super hero as the savior, but also hope and the high opportunities in this movie are offered by people often wronged in real life and not well represented on screen. Second, it suggests the perfect image of future where man enjoys an environment friendly high tech life style. The land of Wakanda illustrates Planet Earth as a place where modern technology serves man evolution and also preserves nature.

Black Panther movie combines superhero movie qualities from a thrilling story, impactful computer-generated scenes, with contemporary neat plot, besides it is the first Marvel Cinematic Universe film starring a black superhero. For all those reasons it is certainly remarkable. This film is a testament to excellence that cannot be denied.

Shertaon Miramar Resort Is Ready to Safely Welcome Back Guests 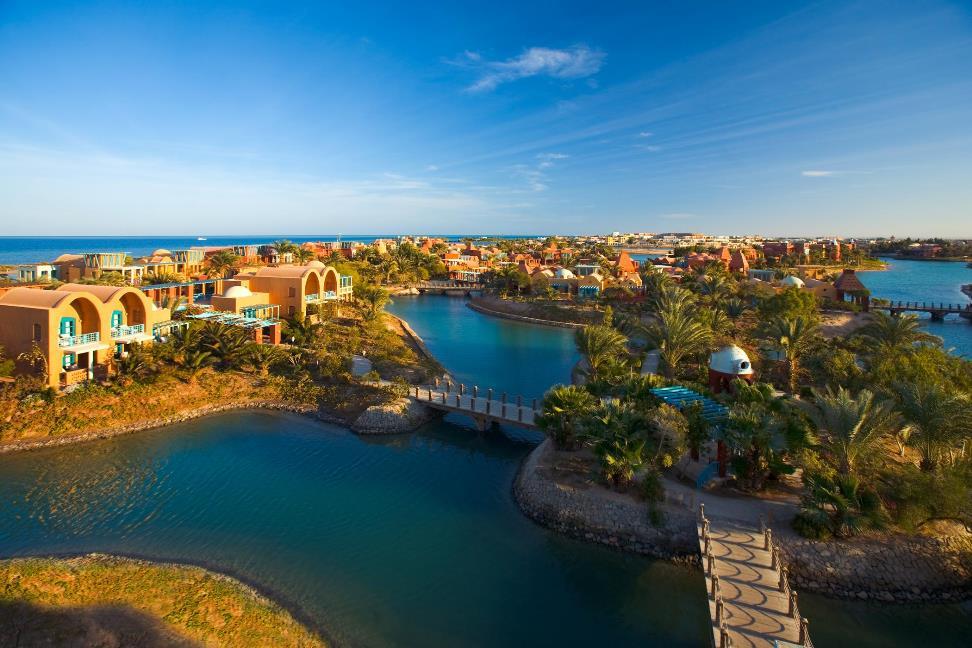 Sheraton Miramar Resort El Gouna is honored to announce its readiness to welcome back guests after receiving the health certificate by *TÜV NORD & Ministry of Health and Ministry of Tourism after an intensive inspection process.

We will continue to monitor the situation, as well as continue to follow the recommendations of the World Health Organization, Centers for Disease Control and Prevention and local health authorities. 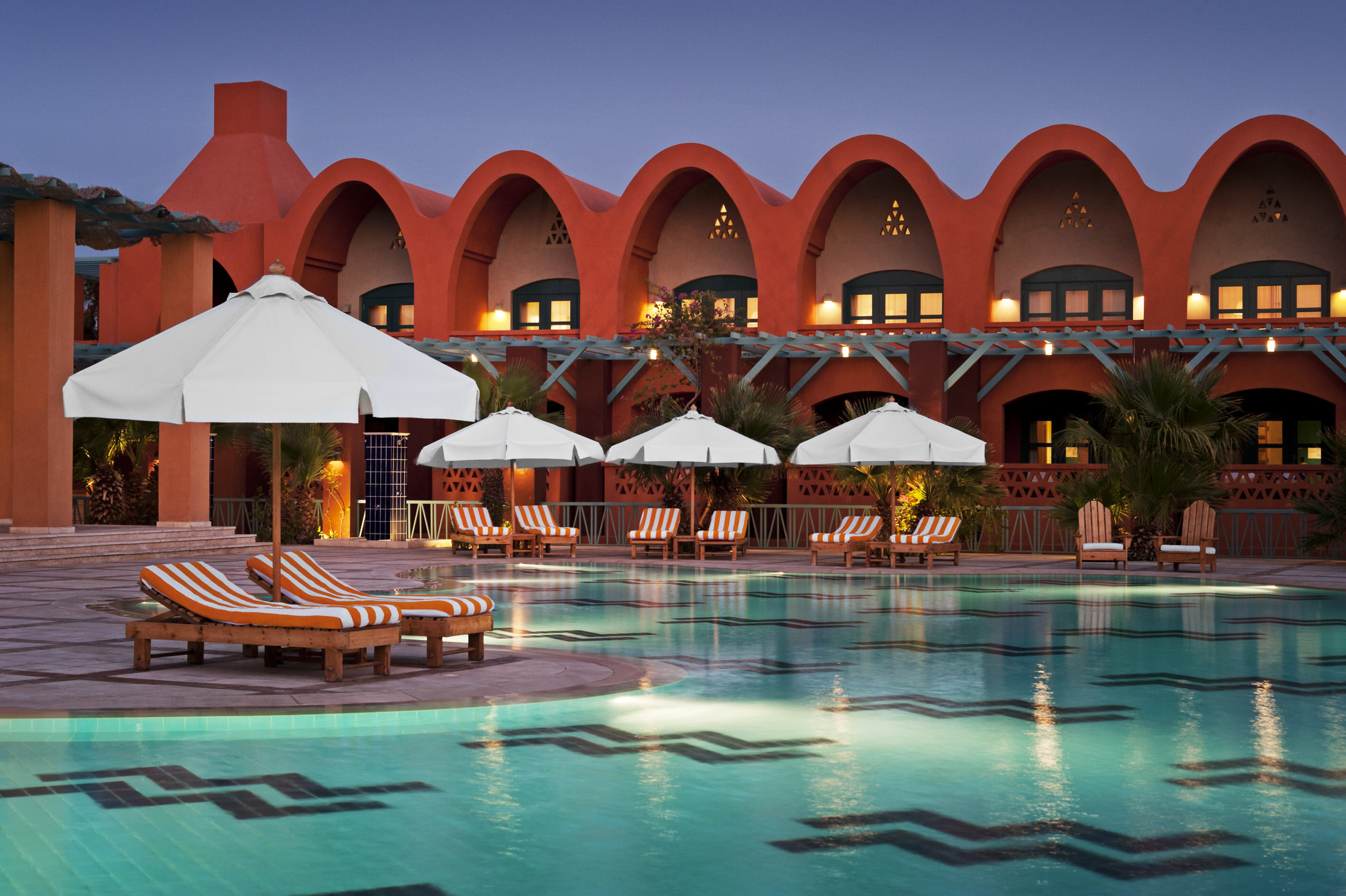 The Sheraton Miramar with its unique seafront setting awaits you. 339 guest rooms are spread across a myriad of islands interlinked by crystalline lagoons. All feature a spacious and secluded terrace or balcony with stunning views of the lagoons, pools and the private beaches.

The Palace Suite is an experience of its own with a private pool, large terraces and generous interiors on two floors. We are committed to making your vacation as effortless and memorable as possible. Just relax and enjoy the Sheraton Miramar Resort El Gouna experience. Discover countless opportunities for fun, fitness and fresh-air activities from the 18-hole USPGA golf course, designed by Gene Bates. 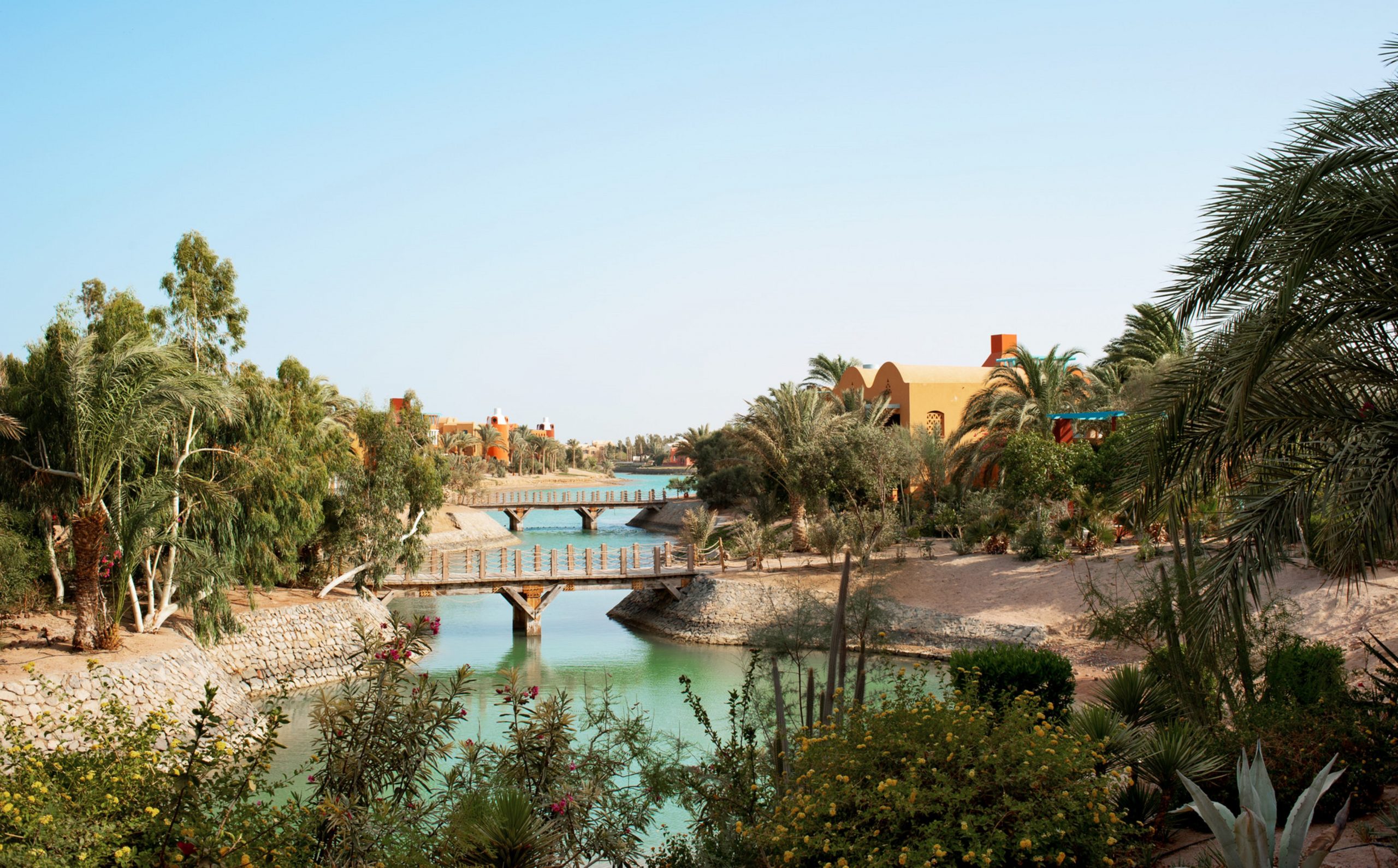 The course is accessible to every level to our Sheraton Fitness with professional assistance if desired or indulge in your favorite water sport or discover the spectacular dive sites nearby. With all of these activities and evening entertainment it perfectly suits family, romantic holidays, Weddings, honeymoons, meetings, seminars and incentives 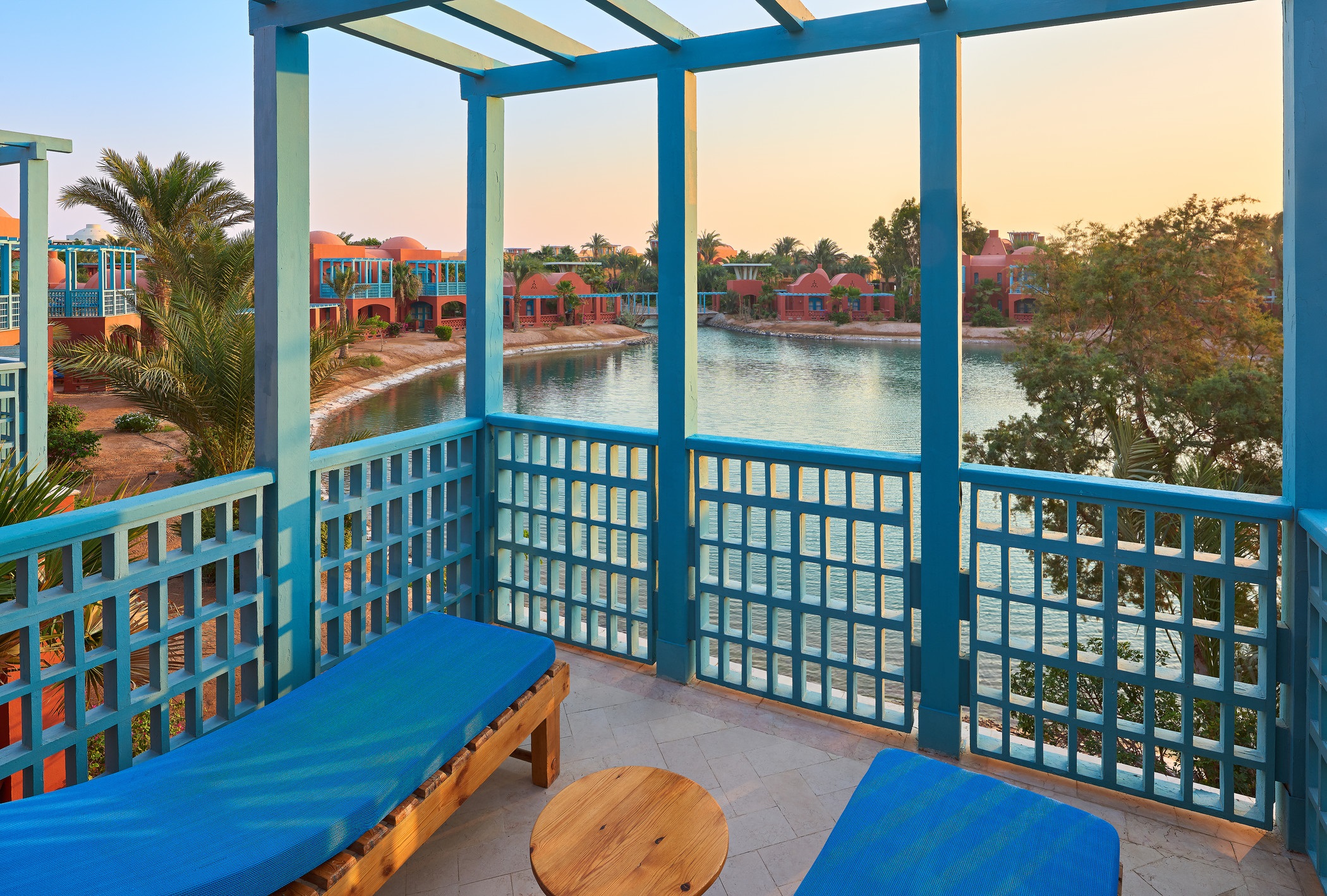 Guestroom reopening on July 22nd  , Prior to reopening, the hotel took several precautionary hygiene measures including additional cleanings across all public areas including the lobby, bar, gym and pool area. 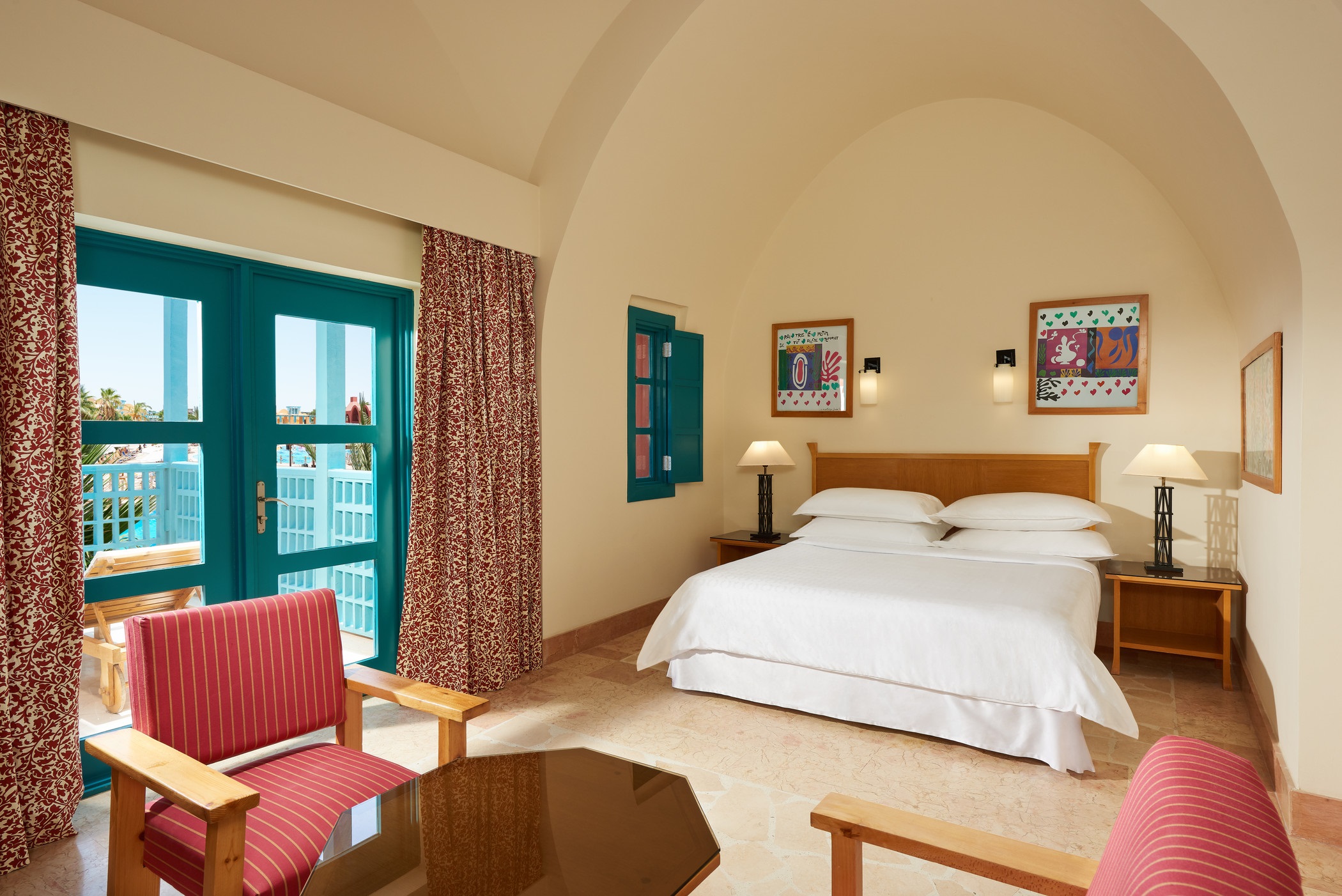 Now that the hotel is starting to reopen, we look forward to welcoming back our hotel employees as soon as possible, whilst ensuring we’re continuing to provide a clean and hygienic environment as always.

In line with directives from local authorities and ongoing efforts to safeguard public health, Sheraton Miramar has enhanced its cleaning and safety measures to ensure that the hotel remains a comfortable and safe environment for guests.

For more information about the hotel, please visit www.sheratonmiramarresort.com 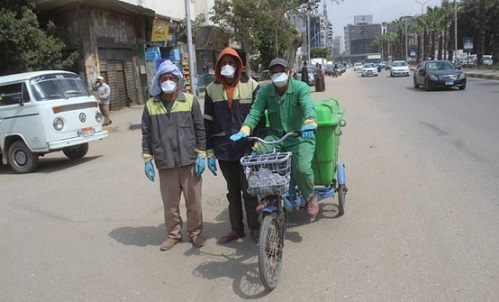 Since the beginning of the Coronavirus outbreak, many people had been affected by repercussions of the virus. For instance, have you guys put into mind that there are dustmen still roaming the streets trying to help clean areas for us as well as trying to make a living for themselves?

These poor people’s job is to stay in the streets, in the open air, where it could be very easy for them to catch the virus due to the lack of care and protection they have been given.

Which is why Mahmoud Shaarawy, Egypt’s Local Development Minister, has stressed this morning on how much of a necessity it is to provide these dustmen as well as blue-collared workers with the essential protective gear such as masks and gloves to help contain spreading the Coronavirus and to help keep these workers safe.

A new set of safety instructions as well as a major protective plan that will be directed by our President Abdel Fattah el Sisi is set in motion to take place, added the Minister.

Companies and Contractors have been demanded by governors to apply serious safety precautions and most importantly the correct care requirements for fellow workers as well as trying to raise awareness for the coronavirus.

Shaarawy has also stressed on how crucial it is to follow up with both the contractors and companies to make sure they are implementing the precautionary measures they are forced to apply on the workers. Also, they need to follow up on sterilizing as well as purifying the work sites they are asked to work in on a daily basis in hopes of achieving maximum protection and safety for the workers.

Thankfully, President Sisi has been kind and gracious enough to order protective masks to be distributed amongst all dustmen, janitors, and workers in need of protection to help keep them safe, thus our entire country in good hands.

So far, 139 new cases of the Coronavirus have been found. As for the death toll, it was announced last night that 15 new deaths have occurred. Egypt’s Ministry of Health has broadcasted that the number of infected Egyptian citizens are up to 1,699 and the death rate to 118 people. On the bright side, 348 people have recovered so far after testing positive for the virus. 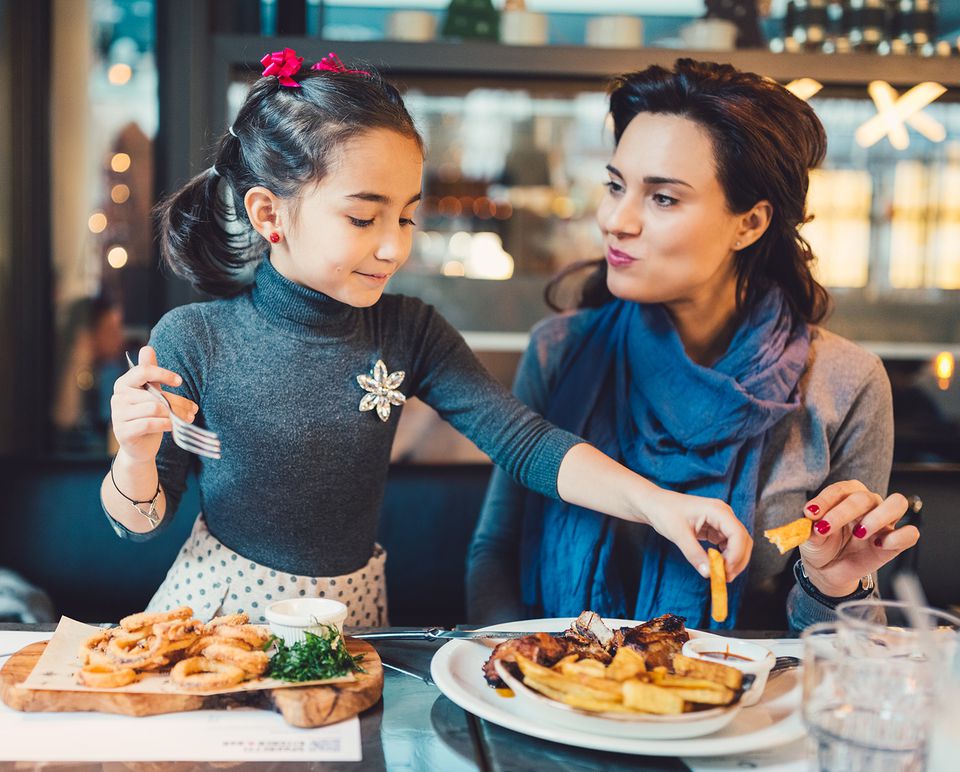 March is the month of women empowerment and the chance to pamper them, the time has come to spoil our mothers with gifts but most important, quality time!

There’s nothing a mother cherish more than spending a good quality time with her kids, so on mother’s day, treat her to a royal breakfast at one of the following restaurants!

Treat yourself to mouthwatering dessert this weekend. Visit Ovio and check out our Chocolate Month Menu. #OvioGoesBelgian #OvioSweetMess

If your mother is a sweet tooth or more into fulfilling breakfasts, then Ovio makes an ideal choice. Their pancakes and eggs are a must try, and the atmosphere of the place is just what you’re looking for.

The best thing about Qahwa is their salads! If you and your mother are the fit kind, then Qahwa is your go to place with wide variety to choose from and great vibes to enjoy.

Whether you like to chill in a cozy corner or relax under the sun, we’ve got a space for you! Tag a friend you’d like to have breakfast with at #MAAT.

We would always choose Biota for not only their remarkably delicious food but also their stunning view of the Nile. Whether your mother likes to chill in a cozy corner indoor or relax under the sun, they’ve got a great space to cater to all.

Personal favorite is their pancakes and profiterole.

We know what you're craving for… "a full stack of pancakes with extra Nutella" will satisfy your needs for sure. #nutella #chocolate #pancakestack #breakfast #desserts

Bubblicious is the first place to serve bubble tea in Egypt. A drink that you can eat! A great first time experience to enjoy with your mother, they’re also known for their juices and delicious stack of pancakes.

Anything can be cured with an appetizing breakfast and a mesmerizing view. Call us now at 0223651234 or 01153388874 for reservations. #GrandNileTower #GrandMoments #GrandViews

A perfect morning outing with your mother consists of two things, a leisurely breakfast along with a stunning view. Grand Nile Tower’s Sakya Souk has got both!

From its name, the restaurant calls out for all the eggs lovers with a good taste in food. So if you and your mother are the early birds, who appreciate a good fulfilling breakfast of eggs creations and innovations, then this is the place for you!

Besides their delicious Cake Cafe is one of the most Instagramable cafes, so if you’re looking to capture a moment with your mother while enjoying your morning date.

Paul will always remain one of the best breakfast spots, with their freshly delicious bakery and wide variety of sandwiches.