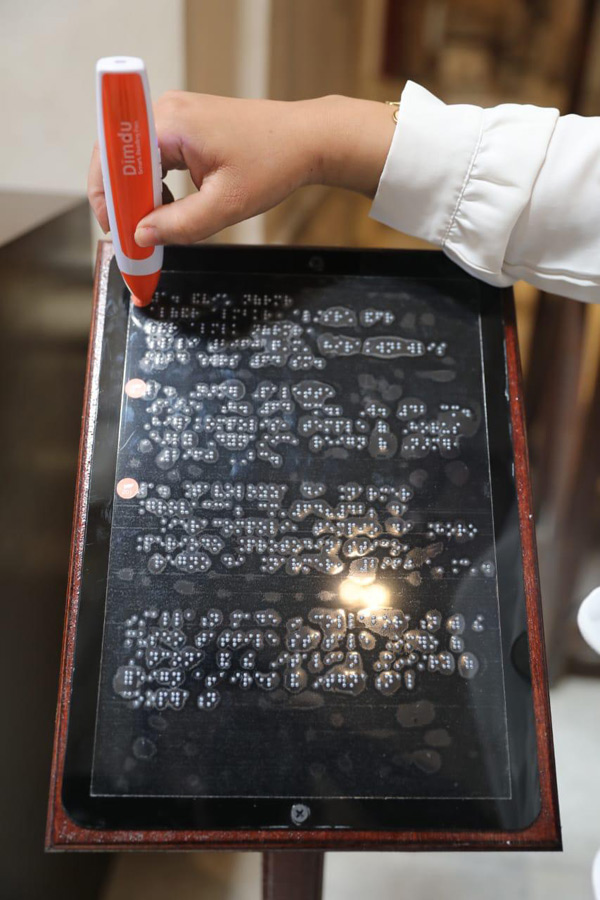 A new path in the Egyptian Museum in Tahrir was inaugurated on June 20 for the visually impaired.

The inauguration of the new path was opened by Egypt’s Minister of Antiquities Khaled El-Enany, Minister of Tourism Rania Al-Mashat, Sports and Youth Minister Ashraf Sobhy in the presence of 16 foreign ambassadors.

Such an impressive reform was developed under the vision of the Vivere all’ Italiana programme by the Italian Ministry of Foreign Affair.

The path for the visually impaired was made by the Archaeological Centre of the Italian Cultural Institute in Cairo, the Egyptian Museum and the Museo Tattile Statale Omero in Ancona.

This is considered as a huge step and quite the impressive gesture as it will allow people with disabilities to visit the Egyptian museum and learn more about the history of their country.

The new special itinerary relies upon the expertise of the Omero Museum in Ancona, where the visually impaired can enjoy art along with the rest of the public.

The Egyptian Museum in Tahrir is the first to apply this initiative but won’t be the last as more museums in the future will follow the same steps.

Major Development Plan Announced For the Egyptian Museum in Tahir 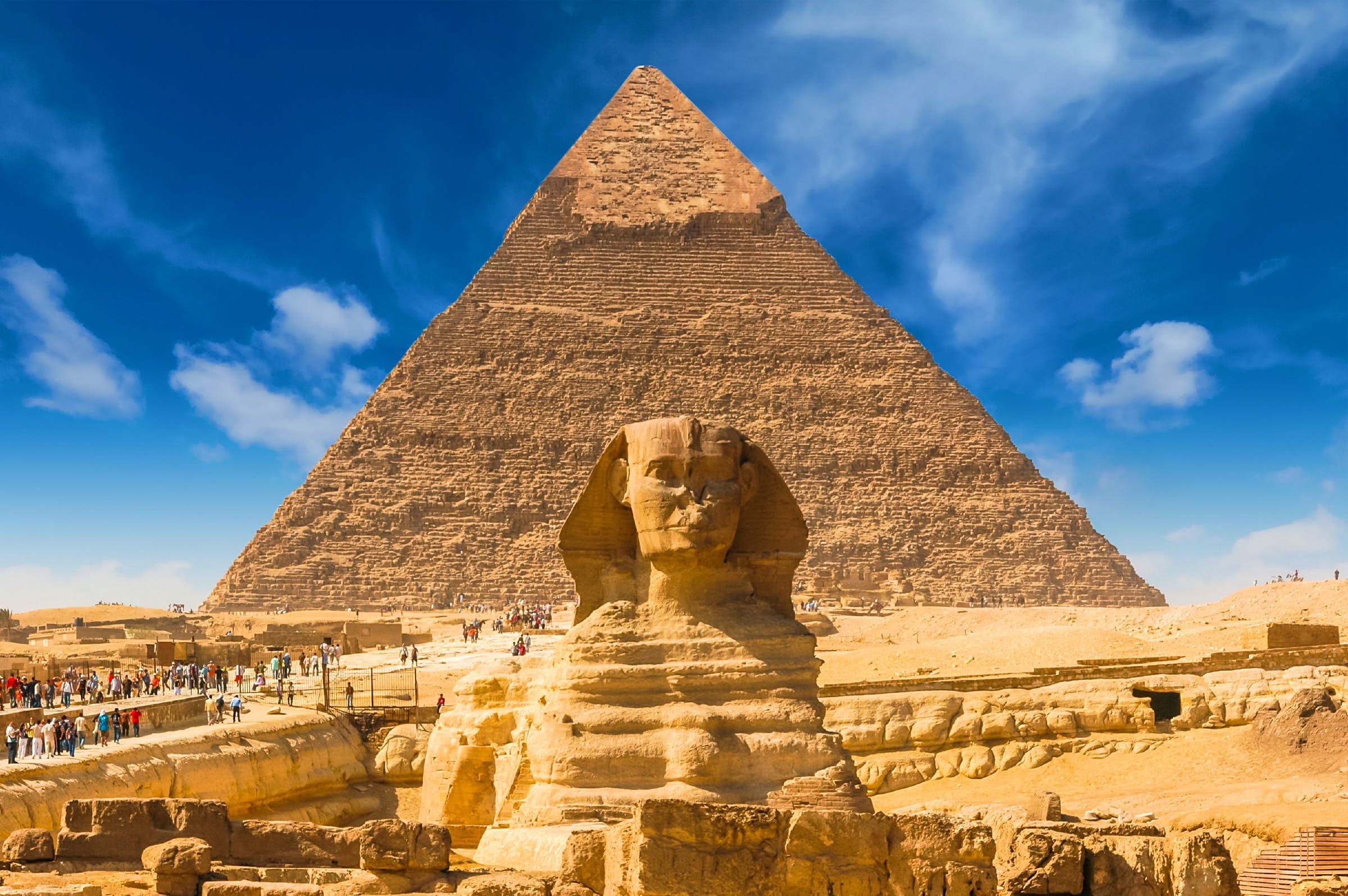 So far, all open archaeological sites remain closed since the coronavirus outbreak as part of Egypt’s Ministry of Tourism and Antiquities’ efforts in combating the pandemic.

But now, several countries have begun to reopen their sites once again for visitors so what is Egypt plan to follow in the same steps? Should we expect a reopening soon? Well, here’s what we know so far.

On this occasion, director of the Pyramids Archaeological Zone Ashraf Mohieddin spoke about the plan to reopen some of the areas for visitors.

According to him, once Egypt decided to reopen the archaeological Pyramids’ area for visitors, they will maintain all safety and precautionary measures.

These measures will be aligned with Egypt’s strict instructions in order to combat the spread of the virus, this means that both and visitors will be urged to wear masks and gloves at all times.

Mohieddin also added that the temperature of each visitor will be taken upon entering and that the area will be sanitized daily.

It’s also possible that the number of visitors will be reduced by 25% in order to maintain social distance and avoid any over crowding.

Finally, Mohieddin said that on the other hand, closed places including ancient graves may remain closed in the first stage of re-opening touristic sites. 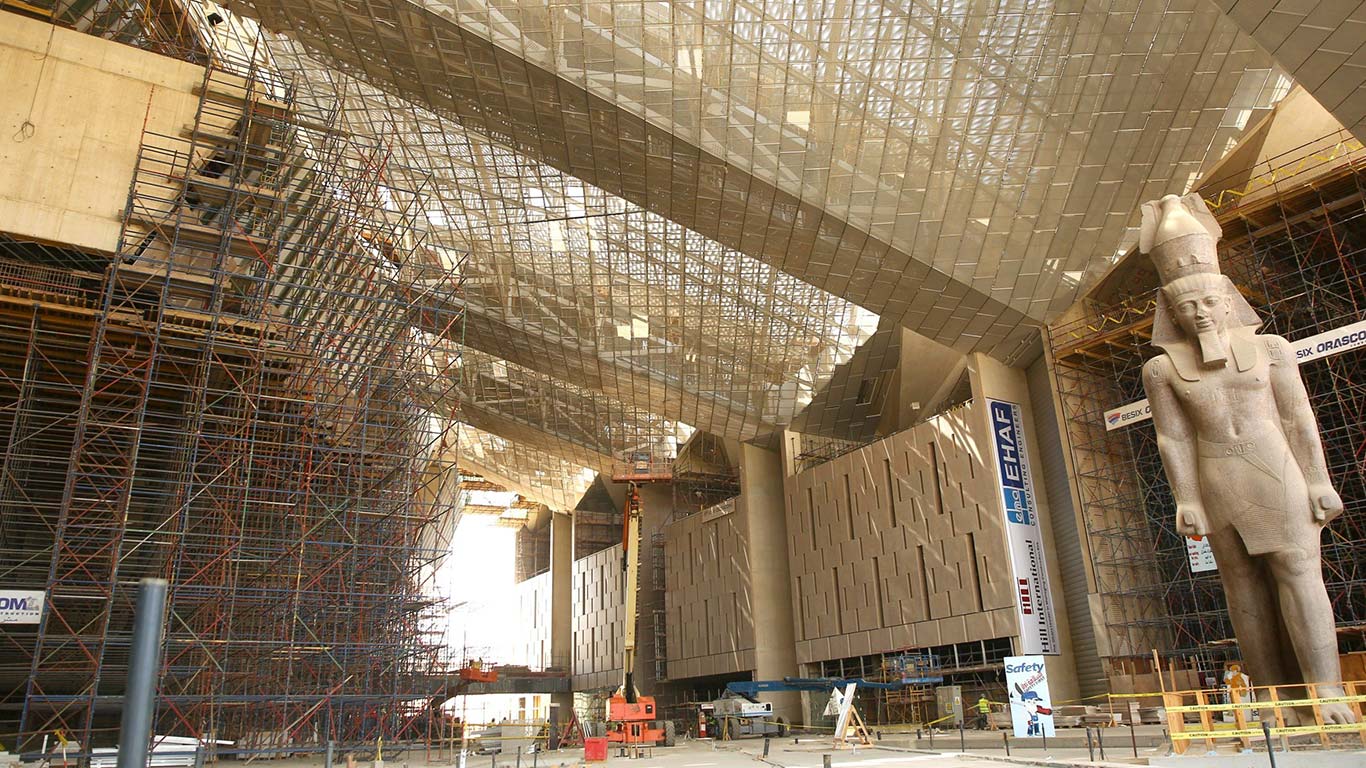 A collection of 346 artifacts have been been transferred successfully from the Egyptian Museum in Tahrir Square to the GEM, the transfer included the significant statues of King Senusret I.

According to the General Supervisor of the Grand Egyptian Museum Atef Moftah, the statues have been temporarily placed in the grand foyer, awaiting to be moved to their permanent spot in the museum.

Director General of Antiquities Affairs at the Grand Egyptian Museum Tayeb Abbas said that these magnificent statues of King Senusert were discovered back in 1894 at a crater in the funerary temple of King Senusert I. 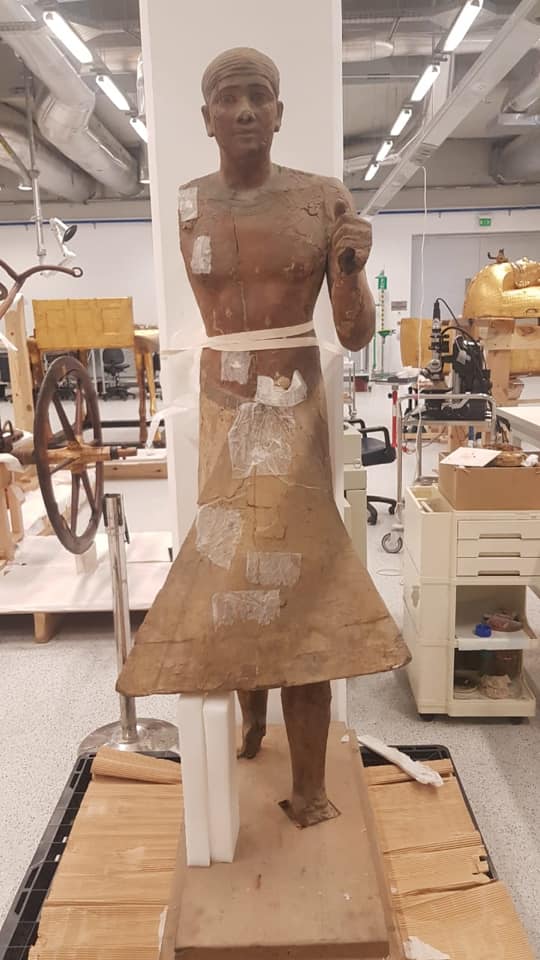 The statues are made of limestone and were first placed in the Egyptian Museum in Tahrir in 1895. The statues depict young King Senusert I sitting on the throne. 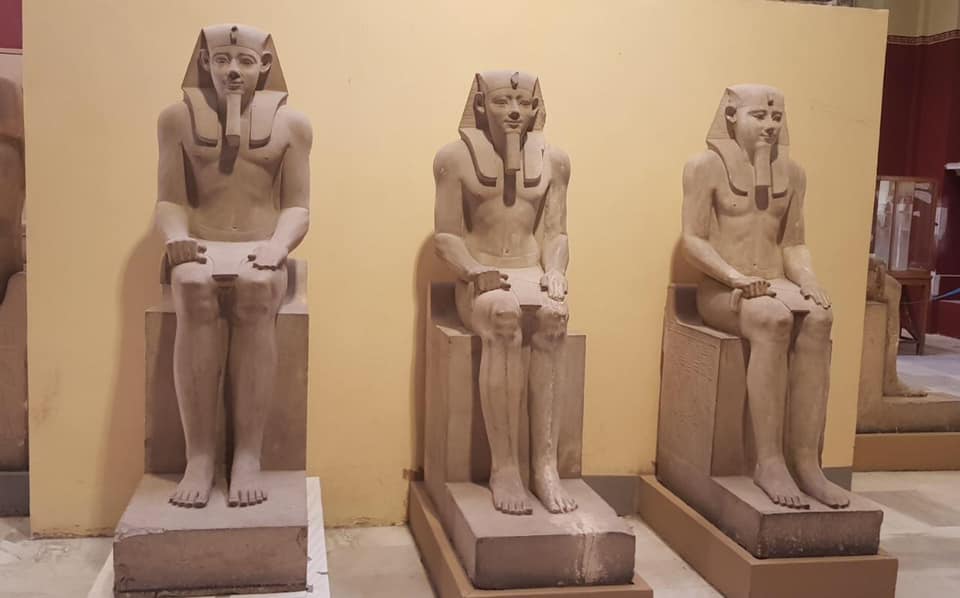 Another artifact of great significance that the GEM received is the seven oils rectangular plate, a tool that was used in burial rituals.

Director of the Department of Restoring and Transferring Antiquities at the Grand Egyptian Museum Eissa Zidan assured that the process of transporting the artifacts is done with great keen. The packaging and securing of pieces are all documented using internationally recognized scientific methods. 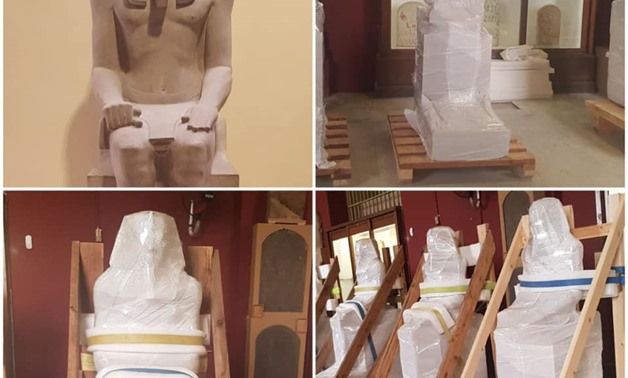 We’re glad to see that with the ongoing crisis, the GEM isn’t affected and we can see the great effort being put in order to have the opening ceremony as expected, later this year. 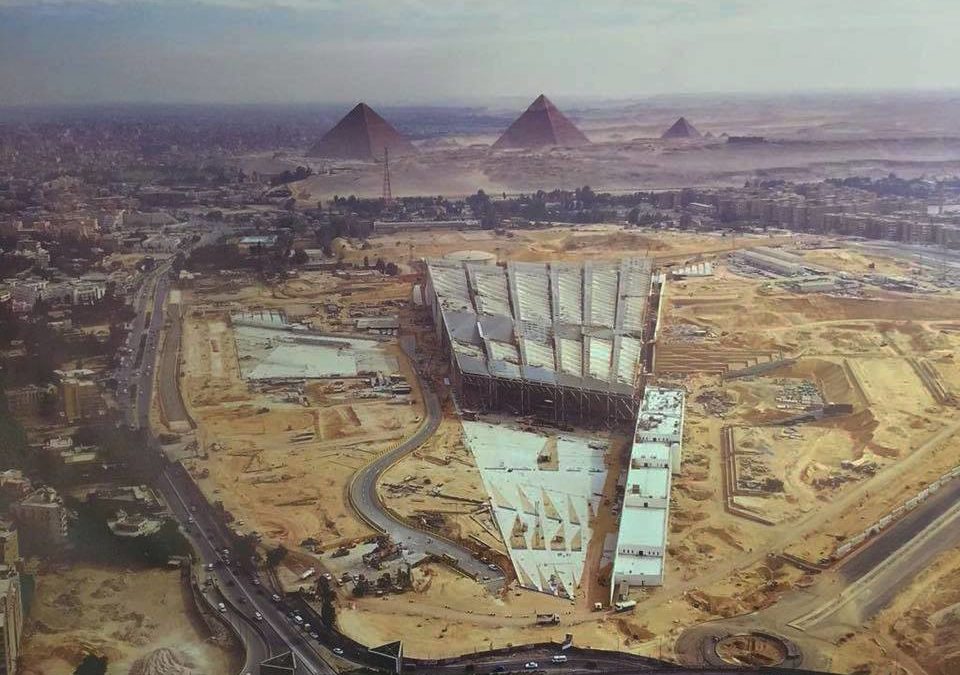 The opening of the Grand Egyptian Museum was scheduled for the end of this year but after the coronavirus outbreak, a delay on the opening has recently been announced.

As much as it saddened us all especially that this is one of the most anticipated events worldwide, we are now hopeful that the delay won’t be too long after yesterday’s visit of Egyptian Minister of Tourism and Antiquities Khaled el-Anani to the museum and the President’s decision to carry out works on major projects

Yesterday, Minister Anani paid a visit to the museum in order to follow up on the latest developments of the project during the crisis, and to ensure that all preventive measures are being taken. 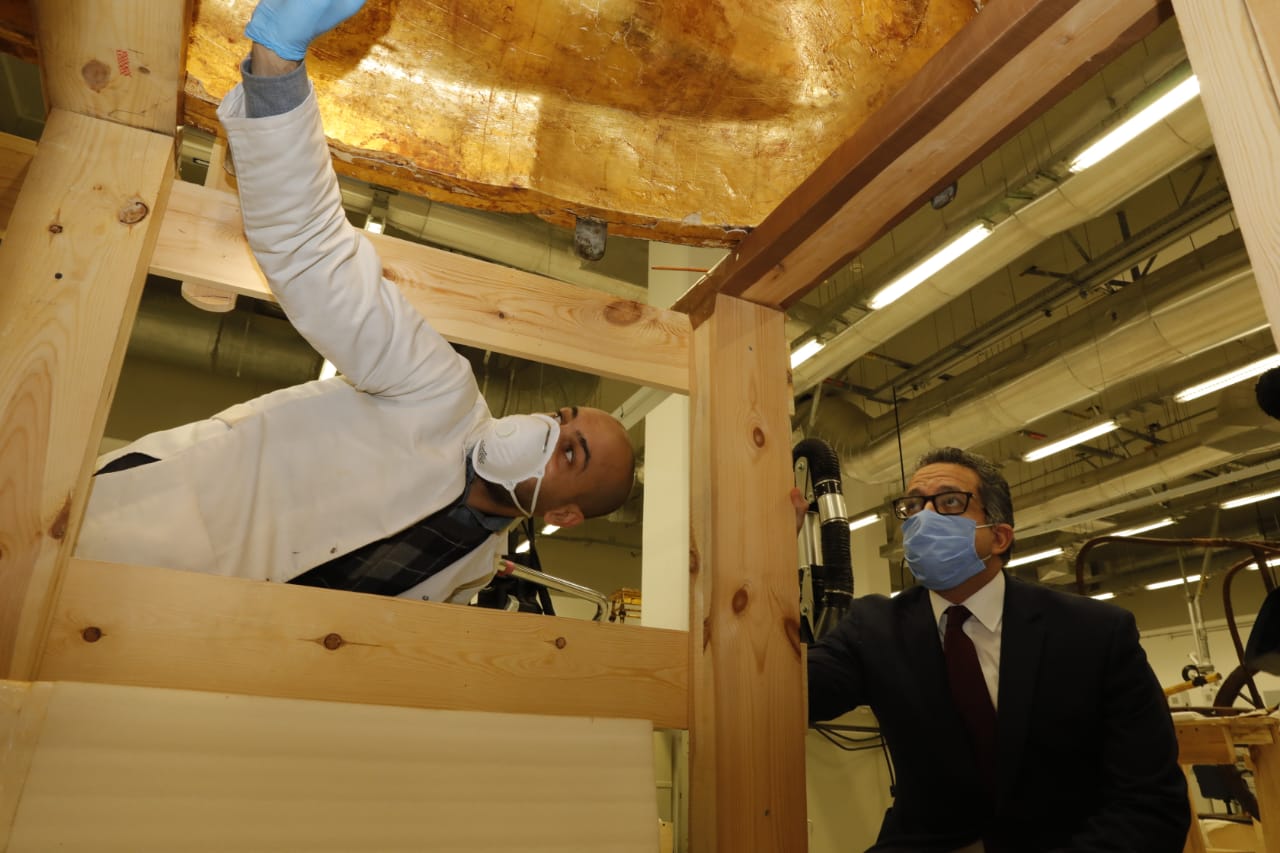 General Supervisor of the Grand Egyptian Museum Atef Moftah, Director of the Museum for Archaeological Affairs Al-Tayeb Abbas, and a number of leaders of the ministry and the museum all accompanied Anani during the visit. 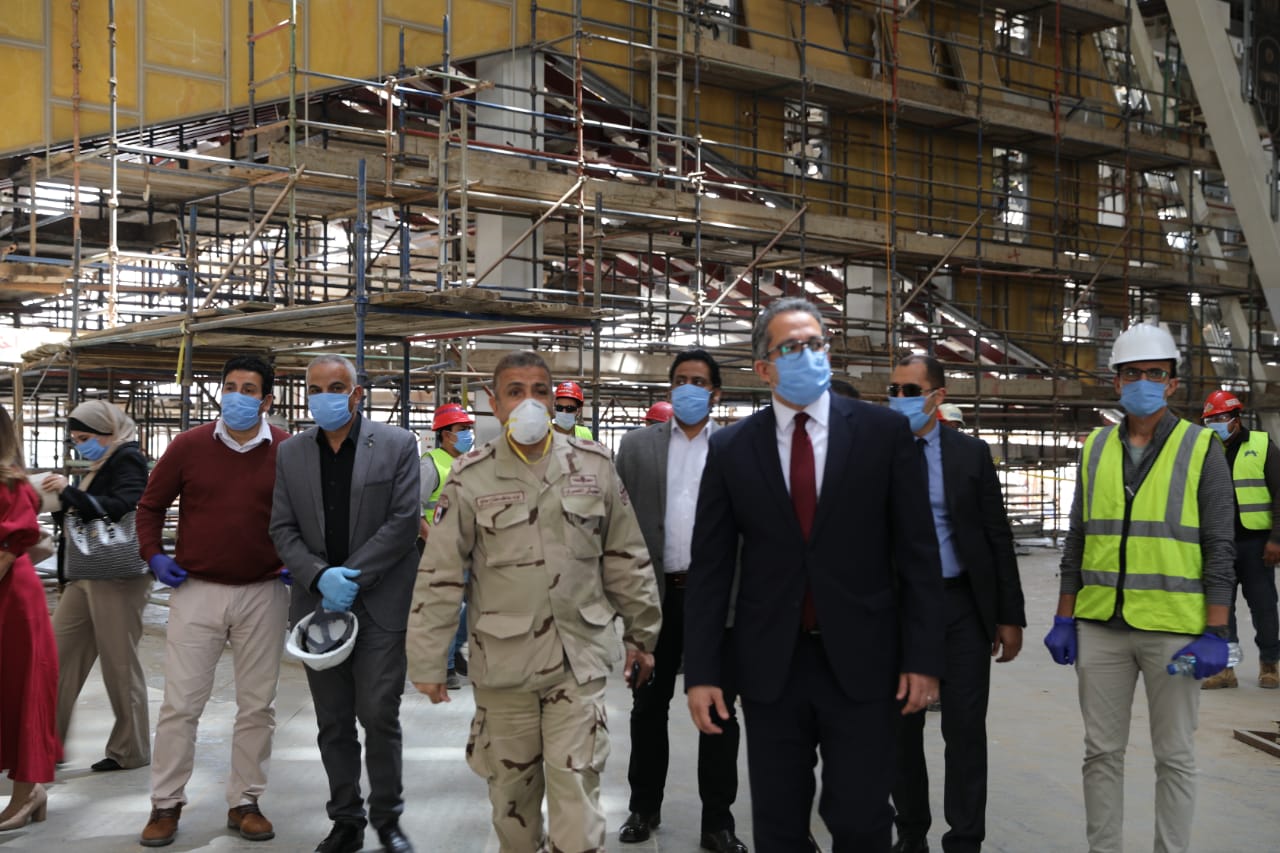 The tour included a visit to the Archaeology Restoration Center, Wood Restoration Laboratory, where some of the artifacts of King Tutankhamun are being restored and an inspection of the museum’s construction site also took place. 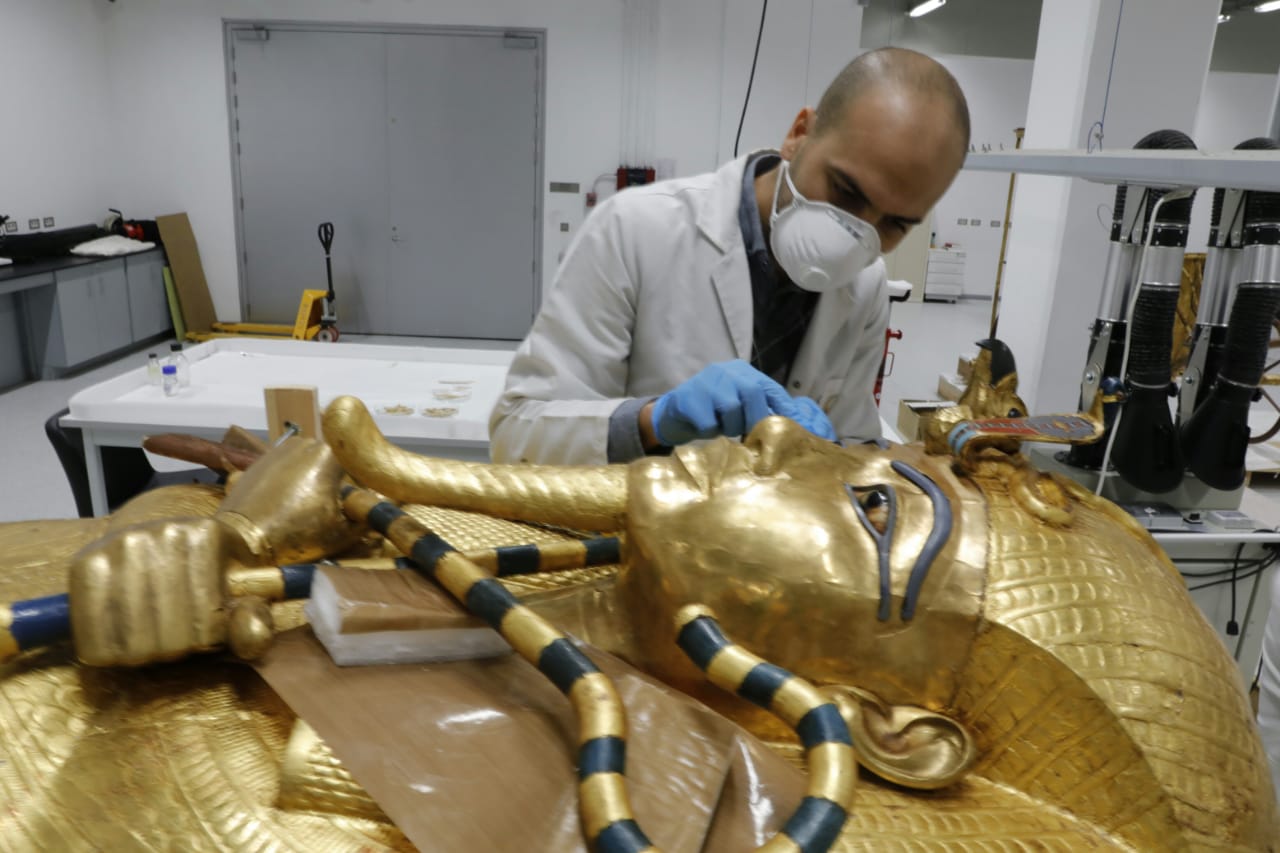 According to Anani, that despite the current crisis of the coronavirus, development work of the museum hadn’t stopped and that is upon the President’s decision to carry out works on major projects but of course in respect to all precautionary measures.

Anani said that at the moment, 1700 laborers are working in the museum, besides 300 engineers and supervisors representing 33 Egyptian companies out of a total of 65 companies, completing work at the museum at a rate of 50 percent per day. 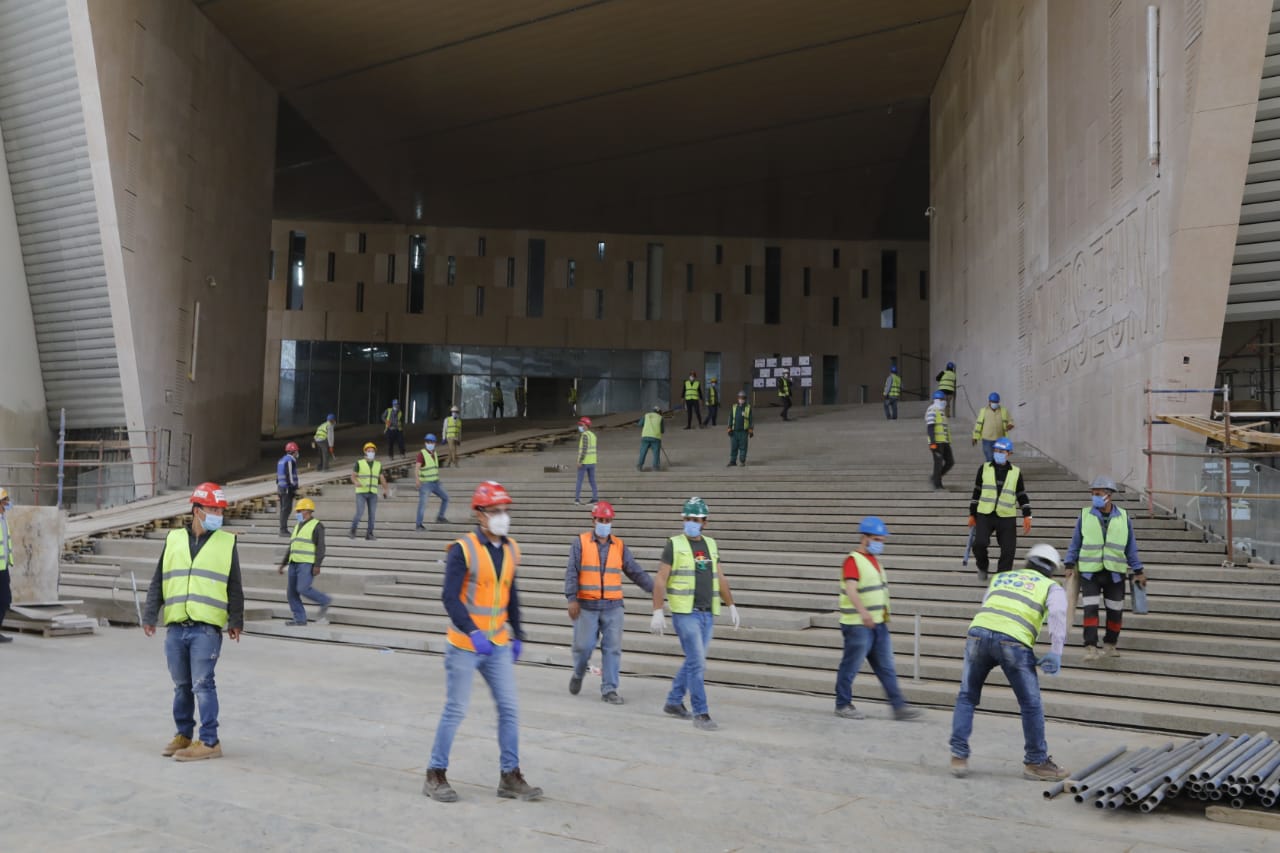 That comes in light of the decision to reduce the number of workers as a precautionary measure taken by the state to protect workers from the novel virus. 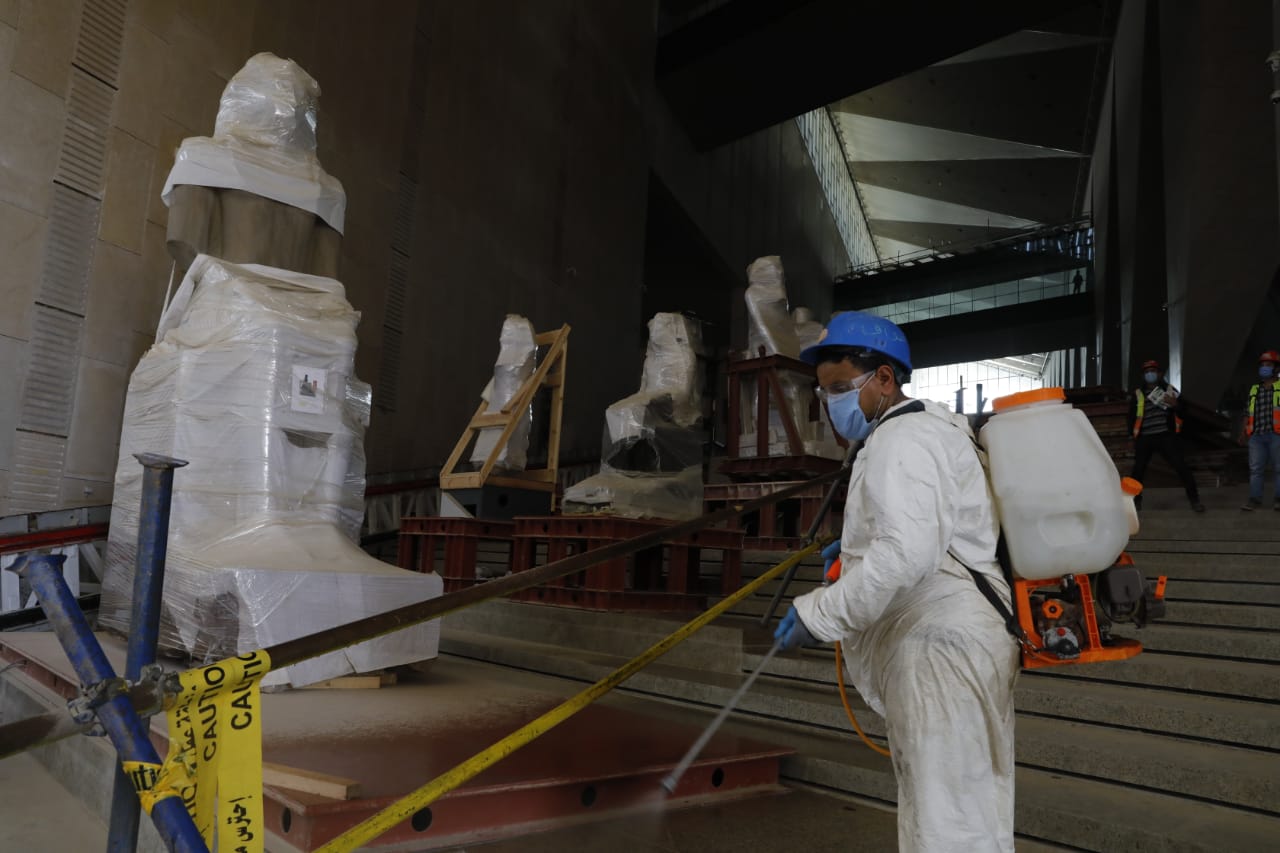 Moftah also added that workers are examined everyday upon arriving to the museum and before leaving, in addition to passing through a sterilization corridor before entering the museum.

Also worth noting is that two sterilization lanes/corridors have been placed on site, in order to reach the project’s full work capacity after the sterilization and disinfection procedures have been completed. 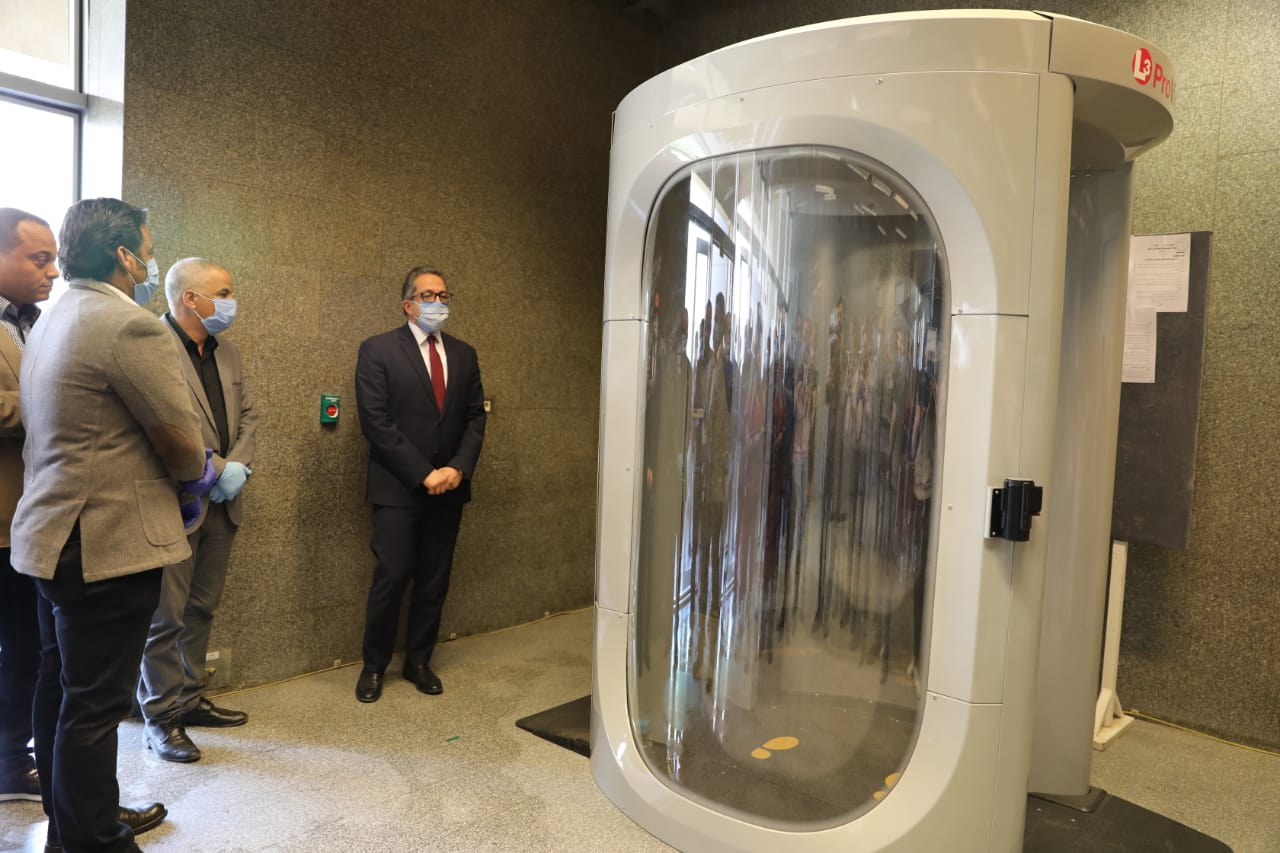 The process of disinfection and sterilization isn’t done once but throughout the day! It’s divided into three periods and that is to reach maximum safety measures.

Not only that, Moftah also added that a training course is being given to all museum staff, in an attempt to spread awareness on the virus.

We’re very proud of our Egypt, very proud of all the measures taken by the government and their efforts in ensuring maximum safety.